What started this whole summer on the road

was my mom and I already being halfway out here and my friend Michael asking me to join him, his girlfriend Leah and their friend Eric on a camping, hiking trip to Mount Rainer National Park (NP), Olympic NP and North Cascades NP. Michael is the planner extraordinaire and did a great job planning out our drives, hikes, and campsites! There’s no way we could have done and seen as much without his attention to detail. I had been camping for weeks when I met up with them on August 1 in Portland, OR. We spent night one at an Airbnb just over the state line in Washington complete with a bath tub, piano, and breakfast- it was heavenly! I’m a firm believer in self-care, especially baths and it was such a treat to sink into a steamy hot bubble bath with classical music wafting in from the other room where my friends are showing off their musical degrees. Michael, Leah, and Eric all met at the Music Conversancy at Baldwin Wallace and are thus all blessed with musical ability on some instrument or another. Guitar, piano, vocals- it is good for the soul to just listen to them discuss classical music.

On day two we drove to Mt. Rainer to hike Panorama Point and set up camp in Mt. Rainer at Cougar Rock. It was our first experience with the smoke that literally shrouded was nearly the entire trip. 1,500,000 acres of forest are on fire in British Columbia that won’t go out until snow pack this winter! The irony of that is that I sit here in Vancouver, B.C. currently and it is a bright, sunny day. Smoke is tricky like that I’m learning. We jammed our way around the park passing a dancing construction flag holder who was rocking out for 12 hours to the music in her soul because he was NOT wearing headphones haha Staying in Mt. Rainer, we camped night three at Mowich Lake and it was stunning. We hiked Tolmie Peak to the fire lookout, but the smoke was so thick we could only see the outline of Mt. Rainer which we knew stood right in front of us. Eric and I went sled riding on our bottoms down a glacier and I tore my pants to shreds. I think that was the day Eric and I became friends. Tolmie Peak was a fairly strenuous hike up to the fire lookout. Stopping to swim in Lake Eunice on the way down to cool down in the crystal clear glacial water was the perfect reward. A little later we all “lake baths” back down at Mowich Lake and it turned into a two-hour dance party in a little cove splashing about in the water and on a log. It might be my favorite event of the trip; all proud of ourselves from the hike, relishing in the cool water and one another.

We couldn’t stop making beaches and hohs jokes for days 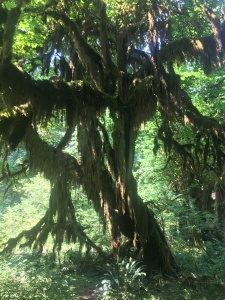 Rainforest in Olympic NP. It was so fun driving into Olympic NP and finding out that the ranger was also a BOBCAT and was at Ohio University the exact same years I was! I love Bobcats, they’re the best. We scored what was my favorite campsite of the trip inside rainforest and headed on a hike in the Hall of Mosses and had a picnic dinner on Ruby Beach. The Pacific Ocean and Atlantic Oceans are so different. I love the stone beaches and drift wood versus our sand and dunes. There was a decomposing whale carcass on the beach and tons of downed trees and little islands for Eric to climb on. Michael warned me, but my heart still sank every time he went running off to climb a tree and jump out or attempt to jump across a water fall or any of the other things he insisted on doing. Adventuring is for sure his favorite. My tent says it sleeps five people, but after sleeping in to with four people in it for two weeks I beg to differ. I did sleep in my hammock in the Hoh Rainforest because it felt super safe there, but it wasn’t any more comfortable. Our second day in Olympic we hiked Hurricane Hill and while the wildflowers and glaciers were beautiful, the entire skyline being a sheet of smoke was disappointing. Mt. Olympus was supposedly right in front of us and we saw nada. We decided it was a great reason to come back and compare notes between the trips. We woke up early to catch the ferry to Seattle and I fell in love with the city early. Pike Place Market, the first Starbucks, the Starbucks Roastery, and just walking around downtown was such a difference to being in the woods that we were enthralled. We had another great Airbnb where we could do laundry, shower and sleep in real beds! I even took advantage of the meditation corner and spent some stillness with spirit. We went out to dinner and to a former mortuary for drinks afterward. After spending so much time in the woods it was fun to just me normal 20-somethings laughing over beers.

We spent three days in North Cascades NP doing smaller hikes and preparing ourselves for the longest distance and highest elevation change hike for us on the trip, but also for all of us in life. Ranger talks in North Cascades NP were fun and informative each time we went and because we spent three nights there it started to feel like home. The hike into Cascade Pass and the Sahale Arm together is 6 miles with 4,000 ft in elevation and is 12 miles round trip. We did it in about six and a half hours saw a black bear on the trail about 30 ft ahead of us on Sahale Arm! What a way to end the trip! I learned some fun things on this trip:

– A “14er” references a mountain over 14,000ft in elevation and is a distinguishing characteristic

– A “clip” refers to your hiking pace

– $40 is not enough money to drive from Portland to Missoula

When my card got declined at the first Starbucks I thought it was because I was in a new state- wrong! Chase has closed my account because of no longer permitted night deposits and apparently had sent snail mail letters to my mom’s house informing me of this. Letters that I never got. Good Lawd. So was literally penniless in Seattle. Thank god for western union and being with friends who refused to let me starve. I couldn’t even accept Venmo because I had no debit card linked to a bank account to use the freaking money. It was a nightmare situation, but my random, adventure riddled life has taught me to trust myself and know that all I can do is handle that shit! I can run out of gas, money, and sleep all alone in the woods and be ok. Better than ok, great! Nicole at the Exxon will spot you gas money and it will feel great to pay her back and then some with a cute thank you card you got at a local store. It will all always work out.

Cooking over the fire is something I really enjoy and sometimes it can get boring cooking for yourself, so we had fun and ate some great healthy meals altogether. It’s amazing all the different meals you can create with rice, avocado and a can of veggies haha I think if the boys had any complaint it would be that every meal wasn’t filling enough for their still growing 23-year-old bodies that are empty pits. 30-year-old man’ appetites have slowed at least a bit, I had forgotten that 23-year-old boys are hungry ALL. OF. THE. TIME. I will give credit where credit is due however and they we clutch when it came to packing the car. I have to admit that in my experience men have better spatial skills than at least me if not “women”. The car had to be packed in a very specific order so we could get all the bags, camping tote, cooler, sleeping bags, etc in the trunk. I have truly fallen in love with our National Parks this summer. I believe they are something we really bring to the table as a nation and that we can all be proud of.

We celebrated being back in civilization and our trip with dinner and beers at the Deschutes brew pub in Portland for our last dinner before parting ways. We will forever share what only friends who have laughed until they cried, hiked until they bled, and were very smelly together can share and I’m so grateful! Speaking of gratefulness, shout out to my buddy Mike for helping me keep my car safe and in the condition in which I left it in in Portland. Coming back to my car is almost as comforting as going home is for others. Back on my own again!